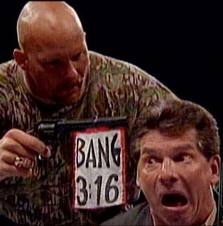 Let’s go back and take a look at what, in my opinion, is the rivalry that almost single-handedly changed the future of professional wrestling. In the summer of 1997, WCW was stronger than ever. The nWo had been running wild since July of 1996, and the Monday Night Wars had really heated up. Week after week, the WWF’s flagship program, Monday Night Raw, was being beaten in the ratings by WCW’s counterpart, Monday Nitro. Eric Bischoff was pulling out all the stops, and seemed to have the upper hand. In response, the WWF began to evolve, targeting a more mature audience with more colorful language, women with barely any clothing, and more edgy angles. Another thing going for the WWF was the emergence, seemingly out of nowhere, of new big time Superstar and future face of the company, “Stone Cold” Steve Austin.“Stone Cold” was the epitome of everything the WWF was trying to be at the time, as well as someone the audience could relate to. A beer drinkin’, bird flippin’, trash talkin’, ain’t gonna take crap from no one, blue collar, every day Joe. People opened up to “Stone Cold” from the get go, and he was gaining popularity at an unprecedented pace, ever since winning the King of the Ring in the summer of 1996 and uttering the now famous phrase, “Austin 3:16 says I just whooped your ass!”. When Summerslam 1997 rolled around, Austin was still gaining popularity every day, and the company decided it was time to give him the second most prestigious title in the company, the Intercontinental Championship. During the match with Owen Hart however, a tombstone piledriver was botched, and although Austin was able to finish the match and win the title, his neck was broken as a result.
In the weeks following, Austin was unable to compete, but it didn’t keep him off the air. Austin continued to try to get his hands on Owen, but Vince McMahon and the WWF wouldn’t allow him to compete, even going as far as suspending him. At the following Pay Per View, Ground Zero, due to Austin’s suspension and inability to compete, Steve Austin and his tag team partner Dude Love were stripped of the WWF Tag Team Championships. When “Stone Cold” came out to surrender the title, he was livid and told Vince McMahon, who was sitting at the commentary table, he was going to “stomp his ass in the ground.” The following night on Raw, Vince took it one step further, and stripped Austin of the Intercontinental Championship. Austin was unleashing cans of whoop ass week after week, stunning the likes of Jim Ross, Jerry Lawler, and Commissioner Slaughter. Owen Hart got a restraining order to protect himself from “Stone Cold,” but the following week, on September 22, 1997 at Madison Square Garden, Austin broke the restraining order and faced arrest. Vince came to the aid of “Stone Cold,” trying to talk some sense into him, but what was to come was the most pivotal moment in the Monday Night Wars and arguably the most pivotal moment in the history of professional wrestling. “Stone Cold” told Vince he could kiss his ass and gave him, what I like to call, the Stunner heard around the world.
From then on, week in and week out, the fans bought tickets and tuned in to see “Stone Cold” fight his boss, something everybody could relate to and something everybody wished they could do. Whether it was beer baths, pouring cement into Vince’s car, or making Mr. McMahon nearly wet himself with a toy gun, it was the most entertaining thing on TV, and certainly the most entertaining thing we had ever seen in the history of professional wrestling. When Vince was scheduled to wrestle “Stone Cold” on April 13, 1998 on Raw is War, the WWF finally beat WCW in the ratings for the first time in nearly two years, and although they went back and forth in the ratings for a few months, by the end of 1998, Raw had surpassed Nitro for good.
WWF had won the Monday Night Wars, and eventually WCW fizzled out, until finally being bought by the WWF in March of 2001. Who knows where we would be today if “Stone Cold” Steve Austin didn’t turn up when he did, at the height of WCW’s and the nWo’s popularity? And who knows how far his popularity could have taken the WWF if not for his legendary rivalry with the boss, Vince McMahon? “Stone Cold” Steve Austin was undoubtedly the most popular superstar of the Attitude era, and perhaps of all time, but remember…it’s great rivalries that make sports and sports entertainment so enjoyable, and there was never, and will never be, a greater rivalry in wrestling than Austin vs. McMahon. 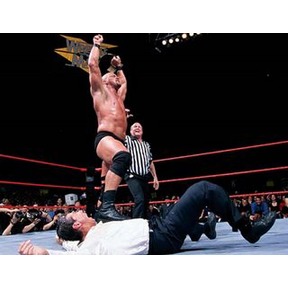 3 thoughts on ““Stone Cold” Steve Austin vs. Vince McMahon: The Most Significant Rivalry in the History of Professional Wrestling”